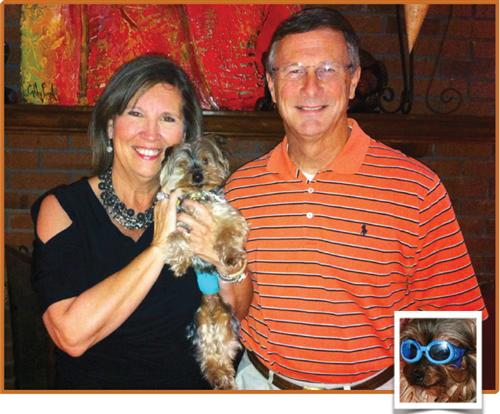 I am always inspired by the families we spotlight each month and challenged to share them with you in the truest light possible. While each family is unique, they share a common love of their four legged babies. They frequently reveal an unexpected narrative or level of emotion which serves as a reminder to the special kind of trust bestowed upon Homeward Bound each time we are commissioned to care for their fur children. This couldn’t be truer for Hal and Carole Haney. We have watched as their little buddy Rambo has experienced many challenges as he had grown older and fully expected them to reveal their heartfelt love for him. But I was overwhelmed by their obvioove and affection for each other and the fluidity with which they shared their memories of family and the joy Rambo he has brought to their lives.Often life’s successes and failures boil down to a few fateful decisions made early in life. Hal and Carole were fortunate to have set out on a solid foundation at a young age. It isn’t every 6th grader who meets their hearts true love and recognizes it. Hal, a native Oxonian, met Ms. Carole Butler in his 6th grade class in the early 1960’s after her family relocated to Oxford from Pontotoc. They have been inseparable ever since, and even have the class photo to prove it!

Hal and Carole married in 1972 while both attending college in Jackson; Hal was pursuing his Doctorate in Dental Medicine and Carole her Law Degree at the MS College of Law after earning her Masters in Special Education. This was an exciting and eventful time for them. During her senior year, Carole was recruited by the director of the newly founded North Mississippi Regional Center (NMRC) here in Oxford, for a 1 year contract as the new director of programs. She accepted the challenge and remained the director of programs for the next 5 years! Carole was then promoted to director of the facility in 1986, and served in that capacity for the next 21 years retiring in 2007. Hal was equally as busy opening his dental practice in 1981 and from all accounts, shows no signs of slow down!

The Haneys have two children; Whitney and Hunter both born during the height of their careers. Two professional working parents in the 1970’s and 80’s was a bit…cutting edge, especially in Oxford, MS! While interviewing the Haneys, I found myself wondering out loud, how it was possible to accomplish so much at that time. Hal and Carole responded almost in unison that it wouldn’t have been possible had they not had the total support of both sets of parents, living right here in Oxford. It does take a village!

When their daughter Whitney went off to college, they thought it a good time to fill a little bit of the void with a puppy! No bigger than an apple, they brought home a tiny Yorki. He was so little; Carole wanted to give him a “name that would instill confidence”. They named him Rambo! He would after all, have to survive the rough-play of the still young Hunter and his friends. Rambo stepped right into his name, held his own, and stole their hearts! During Rambo and Hunter’s “teen” years these boys “whooped” it up quite a bit. One of their favorite activities was to take the boat out on the lake. While Hunter took to the water, Rambo took to the bow enjoying the wind on his face. Weighing in at only 3 pounds, proper precautions were always taken. Rambo always sported a pair of goggles and a life jacket when on the boat. After all, a small wake could send this boy right off. But Captain Rambo never feared!

Rambo went everywhere with them in his younger years. He was a regular fixture at NMRC and served as a bit of a therapy dog for the residents who just loved him! They called him “Rainbow” and Carole never dared correct them. He is after all, exactly that. Carole has been retired for 5 years but continues to serve on the board at NMRC and she still gets frequent inquiries about “Rainbow”.
In recent years Rambo has had sight significant sight issues. After 3 cataract surgeries and the removal of his right eye he has slowed down a bit. He still loves to take in the fresh air and enjoys gardening with Hal who has quite the green thumb! They recently re-discovered Rambo’s love of a squeaky toy. “At 14 we thought he was over those!” Carole commented but he has been seen tossing them in the air and pouncing on them like a 4 year old.

Carole and Hal celebrated their 40th wedding anniversary this summer but still appear to be as giddy as two grade school children with each other. Their life continues to be enriched by the love of their two grandchildren, their commitment to community and of course little “Rainbow” filling their home with color and laughter.