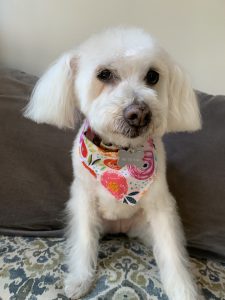 In this beautiful month of June and the first touch of the summer season, we are happy to feature the ever-so-popular Addy Family as our pet family of the month.  Corey and Jenny Addy are the parents of Jackson, William, Lynlee and furr-baby Zoey.  Jenny originally from Lufkin, TX and Corey from Vicksburg, MS met while they were attending the University of Mississippi. After graduation, they both found employment in Oxford, and decided to dive in and call this wonderful place home. Loving what it offered for them to raise their children here, great public schools, and close sense of community and family, obviously made it ideal.

Corey and Jenny are true leaders in their family and community. Jenny, obtained her Business degree at the University of Mississippi and is currently a pharmaceutical sales representative at Pfizer Pharmaceuticals.  Corey also studied at the University of MS serves as the Senior Vice-president for Bank of Oxford. In addition to their ‘day-jobs’, they are pillars in the community.  Jenny spends tireless hours volunteering at her church, OU Methodist, and the Oxford City School District.  In 2016, she was actually honored as Parent of the Year. On top of all that she makes sure that Zoey never misses her monthly Spaw appointment, by making sure her roundtrip shuttle is booked and ready to get transported by her favorite pet-nannies 🙂

After having their first two children, Jackson and William, they decided to bring some girls to their mix. They had their first baby girl Lynlee and later adopted their precious furr-baby Zoey, a white curly Schnoodle in 2013. They are both darlings!  Lynlee is always up for assisting her mom. During this pandemic, Jenny and Lynlee have actually gotten creative and collaborated on bringing bible study lessons to your home screen via youtube.

Miss Zoey is truly a joyous girl and always goes with the flow. She can be found living the life of luxury with her wonderful family. She always brightens our days and brings a smile to our faces when she visits the Spaw, and she marches right inside, ready for her day of pampering.  We are so thankful for The Addy Family for sharing this delightful pup with us for the past few years! Cheers to the Summer and many more memories to come.

As the days are getting hotter and the nights even longer please join us in welcoming our pet family of the month: The Valle’s! Alicia and Mike were born in beautiful Costa Rica. Mike moved to the United States when he was 11 years old and attended … END_OF_DOCUMENT_TOKEN_TO_BE_REPLACED