This month we feature the Alford family!  During their 25 year marriage, Swayze and Melinda raised two lovely and thoughtful daughters: Lilli, 21, a senior at the University of Mississippi and Grace, 19, a sophomore at the University of Mississippi. Melinda and Swayze first met when she went to meet her sister Stella who was on a blind date….with Swayze! Fate has a funny way of bringing people and pets together.  When the couple got engaged, Swayze was working for a local law firm, in Oxford and Melinda relocated with him. Twenty five years later they are still here and work together for his law firm.

Swayze and Melinda are also parents of two furr kids who capture the heart and are as present in their world as Lilli and Grace are. Rome and Sugar were both adopted by the Alfords from the Humane Society. Both had a very bleak future and on the verge of being euthanized. The course of their lives and the Alfords family was forever changed by their adoptions.

Rome, 12, Australian Shepard, is their “only son”, and Swayze’s only male counterpart in a house full of 4 women! Scheduled to be euthanized at a shelter in Kentucky, he was saved by a local rescue mission and nursed back to health. Rome had a respiratory infection and was severely malnourished compounded by further self-inflicted starvation. He simply refused to eat. When Melinda found him online, she just knew they were his “forever home”. They met the rescue group in Nashville to pick him up. Still very shy from suspected abuse, Rome is as sweet, kind, docile and loyal as they come.

Sugar, 10, an apparent American Eskimo mixed breed, was aptly adopted From the Oxford-Lafayette Humane Society 9 years ago on a steaming hot day in July. It’s their anniversary this very month! A hermaphrodite, she was in the shelter for over a month, being passed over time and again by adoptee families. Her prospects did not look good. However, this did not deter the Alfords and made her all the more charming. Sugar is truly the centerpiece of their family and soaks up every minute of the attention lavished upon her. The “girliest” of the girls; she dances, twirls and flutters about with her little nub tail going a mile a minute! Many years ago, during Homeward Bound’s first pet nanny visit with Rome and Sugar the pet nanny became alarmed when she discovered her “condition” during our routine daily health assessment. A panicked pet nanny phoned Melinda thinking she may need a vet visit. A laughing Melinda said, oops, we forgot to mention she’s a hermaphrodite! When Sugar arrives to the Spaw, there is no need to announce her entrance.  She trots in and you can hear her inner voice saying “I’M HERE” showing off like a little princess should. She loves to run in circles to show her excitement.  One night during dinner the family counted 36 laps around the dining table as they ate.  Rome just watches her from the sidelines and looks at her like she is crazy! Rome is the Yin to Sugar’s Yang; two polar opposites coexisting perfectly.

This family has a long history of having pets. Swayze, an Oxford native, claims his Dalmatian Pepper as his favorite pet growing up. Melinda grew up on a farm in the Mississippi delta, Merigold to be exact. She had many pets through her years there and they often took in strays. She loved them all, but recalls 2 favorites in particular, Benny Boy, a stray mixed breed, and Lady Queen, a poodle. Melinda and her sister Stella still share many fond memories of their pets and the farm, and of course that fateful “blind-date”.

The Alford’s continue to frequently visit their family farm with Rome and Sugar now who love to run free, sniff, and explore. The day always ends with their favorite chewy treats. If Melinda forgets to dispense said treat, Rome and Sugar will remind her at 8:00pm on the dot. Rome starts licking his lips and staring restlessly, while Sugar circles the coffee table as fast as she can to get her attention. Melinda says, “It’s quite the show.”

These babies have brought many smiles and stories to the staff of Homeward Bound and are thankful for the privilege of caring for them! 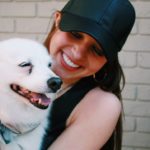 August is a warm and sunny month and a perfect month to feature a warm and sunny family! The Carltons: Kay, Rick and their 2 girls Sister Christian, 12 year old Springer Spaniel and Sally Cinnamon, 10 year old Boykin Spaniel. Of course the girls just … END_OF_DOCUMENT_TOKEN_TO_BE_REPLACED