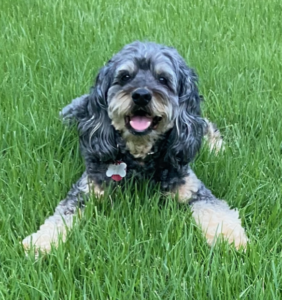 Welcome Fall!  As we encounter this holiday season, we are proud to celebrate the Davis Family as our October Pet Family of the Month.  The Davis Family: Don, Eleanor, McClellan (22), Arden (20) and the sweetest Cockapoo, Buddy (13) have been a part of our Homeward Bound family for almost 7 years!  The story began 24 years ago, when Don and Eleanor met at a wedding in Eleanor’s small hometown in Georgia. It was love at first sight!  Don came to Ole Miss as a freshman in 1985 and never left; and once they married, Eleanor joined him here from Atlanta.

Don and Eleanor had been looking for a new puppy to replace a lost furry loved one that they had for only one month. He had been a Christmas gift for their daughters, McClellan and Arden, until sadly he lost his life to a heart condition.  Finding Buddy after such heartbreak was nothing short of a blessing for the entire family. Buddy was adopted at 6 weeks old, when his great-aunt found him in Atlanta.  The family knew he was the perfect fit and embarked on their road trip to bring him home.  Fun-loving and frisky, Buddy is such a breath of fresh air for his family.  His sisters adore him and he “protects” them by sleeping between their rooms at night when they are home.  When Arden plays her keyboard, Buddy likes to “sing along”. Which is just as adorable as it sounds!  Arden actually chose his name based on the fact that they share the same birthday and thus settled on Buddy. Capricorns unite!

By day, Buddy likes to frolic with the deer that come to visit.  He “sails” off of the porch for a good game of chase. Afterwards, he likes to greet Eleanor when she arrives home by running up the driveway with his ears flapping, excited to tell her of all his big adventures.  After a long day of chase, Buddy likes to treat himself to some juicy watermelon, his favorite snack.  He has also been known to sneak a filet and gobble it up if within his reach. Another of Buddy’s favorite pastimes is extended walks through the neighborhood, which he has enjoyed since he was a small pup.  When the opportunity arises, he gets another favorite ‘treat’… a boat ride!  Buddy has even ventured to the beach on family vacations, and loves to sunbathe on the balcony and feel the salty ocean breeze in his hair.  When he doesn’t travel with his family, he can always count on his Homeward Bound pet-nannies to come visit and take the best care of him.

Buddy and his sisters feel so lucky to have grown up in Oxford.  Buddy is exceptionally grateful that both girls decided to follow in their father’s footsteps, by staying nearby and attending Ole Miss, so he still gets to see them and duet with Arden on a regular basis. And to top it all, as McClellan says, “Buddy is literally the best dog in Oxford.”  We can confirm that he most certainly lives up to that hype!

Hello, June! As the days are getting hotter and the nights even longer please join us in welcoming our pet family of the month: The Valle’s! Alicia and Mike were born in beautiful Costa Rica. Mike moved to the United States when he was 11 years old … END_OF_DOCUMENT_TOKEN_TO_BE_REPLACED