This month we celebrate a little furry boy named Beau, a Biewer Terrier born into this season of thanks. The Fergusons’ anticipation leading up to his adoption could not be more well stated that which the AKC themselves says about this breed: The Biewer Terrier is an elegant… tri-colored toy terrier whose only purpose in life is to love and be loved. What a gift he has been to this loving family.

Vicki and David Ferguson, married now for 31 years are proud parents to their 20 year old daughter Olivia and of course 4 year old Beau. He is the apple of all of their eyes! David grew up in Pontotoc and Vicki in Tupelo. Although they grew up in close proximity to each other they didn’t meet until Vicki was attending school at Mississippi State and were introduced through a mutual friend. Within a few years they married and eventually moved to Oxford to further their respective careers. Vicki was no stranger to Oxford. She came to lots of ball games with friends over the years and loved the town. David attended school in Oxford and is now an athletic trainer and the Marketing Director for Cornerstone Rehabilitation. Vicki is The Clinic Administrator for University Sports Medicine. Several years after moving they adopted a Yorkie named Rudy who was a favorite and Olivia’s childhood pet and “sibling”. During his 13 year lifespan they also adopted a precious calico kitty from the shelter and they named her Angelcake. After Rudy passed, it took another 5 years of research, and lots of requests from Vicki for a Biewer Terrier. Her persistent requests paid off and David surprised her on Christmas morning in 2017 and brought this  precious bundle of joy into their bedroom while she was still sleeping. While sugar plum fairies danced in her head Beau was dancing on her bed!  It is her favorite memory of Beau. While Beau seems to favor Olivia as his favorite, he also adored Angelcake. When she passed away this past summer, he was lost. He also mourns Olivia moving from the family home and into her first apartment. He lays outside her bedroom door thinking she may be in there and just not opening the door. He adores his mom and dad too of course and seeks their constant undivided attention!

Beau does get plenty of attention being the only furry one in the house. David and Vicki play fetch with him both inside and out of the house. Hall ball anyone! He loves to fetch toys or balls especially outside where he can just run and he runs fast! If one dares try to put a harness on him to walk him, he lays down and won’t move. He will literally just lay in the street and refuse to move. He is his own man for sure! His favorite toys are the ones that squeak. He has a gingerbread toy that they call his trumpet because he plays it like one. All in all he is a lover and a pleaser, but sadly he will not play dress up. Vicki had notions that she could put him in cute sweaters and the like, but he wouldn’t have it. He wants to join the family on the  sofa to watch tv but can’t jump up much to his dismay, but he finds his way up with some persistence. They all give in to his preciousness.

While  Beau has not yet accompanied his family on their vacations, he thinks he gets his own vacations. When the family leaves town they have a plethora of friends and family that beg to take care of him and shower him with their attention. He misses Angelcake, but he is not a lonely guy.  Vicki and David are entertaining thoughts of adding another Biewer Terrier to the family and have started looking. Double the love for this family and Beau would have a new little sibling…Stay tuned and  stay Thankful! 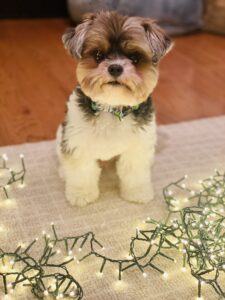 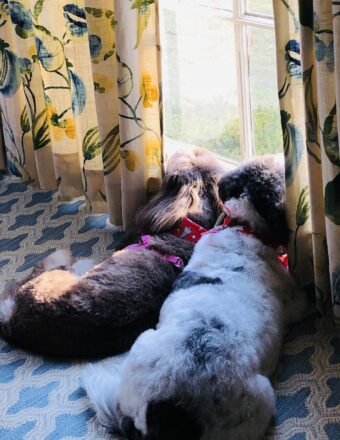 Ready to meet a family that is definitely on Santa's Nice List!? The McLellan Family: Sarah, Michael, their 2 children Elizabeth (12) Andrews (15) and 3 fur babies Millie(9), Bruno (6) and Maggie (6). Millie, a Havanese was a gift delivered from … END_OF_DOCUMENT_TOKEN_TO_BE_REPLACED