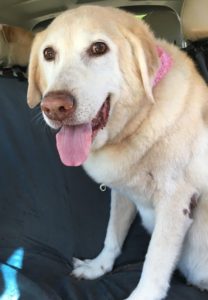 This month of May features a group of Mississippi natives, The Fisher Family.  Lucy, a lass and lab, shares her home with her family Jon, Elizabeth, and siblings John O, Sally Barrow and Farris.  Puppy Lucy was rescued by her crew from the back of a pickup truck on the side of Jackson Ave, just before Christmas 2005. Talk about a Christmas miracle! Sally Barrow and Farris, the youngest siblings at the time, were the closest to Lucy and biggest advocates for bringing her home, since Elizabeth was initially reluctant. They already had another lab, Bull at the time, but eventually the right decision was made, and Lucy was immediately adopted into the family.

Lucy, named from the show “I Love Lucy” for her quirky personality, will actually turn 14 this October. Subsequent to her wanderlust and amusing nature, is her love and admiration for her late big brother, Bull.  These two labs were inseparable… Lucy mimicked everything Bull did and trotted right alongside him wherever he went.  Bull was usually the one to “break out” of the wireless fence, and of course Lucy would follow suit. Their typical route led them to Pat Lamar park to romp and swim. Bull would come home after his journey, but then Lucy often extended her solo adventure!  Lucy and Bull were the best duo, but sadly Bull passed away a few years ago, from heart failure.  He is missed by both his family and Homeward Bound family alike, and his memory will live on in our hearts forever.

All explorations aside, Lucy adores time spent with her family!  Both Elizabeth and Jon are fortunate to be able to work from home most of the time… and Lucy relishes in the company. She has two rooms in the house where she likes to lounge, but first must circle and pace until someone joins her so she can relax. Lucy only goes outside, when her parents leave, and digs a hole beneath the holly bushes to provide a cool place to nap and watch the world go by, much to Elizbeth’s chagrin… especially when it’s been raining 😉  Other than her homelife, there are few things Lucy looks forward to more than her day at the Spaw. Her favorite part is the pet-taxi ride with her other friends to her monthly appointments. Second favorite part is the blueberry facial.

The Fishers cherish how much Lucy has contributed to their family over the past 14 years. Many wonderful memories abound, including: first day of school pictures, Christmas morning cheer and ‘letters to camp’.  When the kids attended summer camp, they would write their letters home and ask about the pups, so Elizabeth would muster up her best ‘Scooby-Doo’ language and respond with letters from Lucy and Bull. How sweet!  We are so excited for the opportunity to create our own memories with Lucy and are happy to spotlight this amazing family as our May Pet Family of the Month!

Hello, June! As the days are getting hotter and the nights even longer please join us in welcoming our pet family of the month: The Valle’s! Alicia and Mike were born in beautiful Costa Rica. Mike moved to the United States when he was 11 years old … END_OF_DOCUMENT_TOKEN_TO_BE_REPLACED