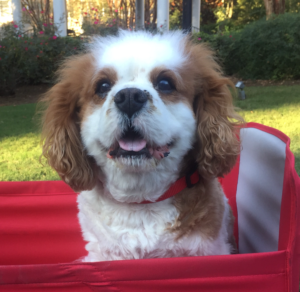 During this month of November, we celebrate the countless blessings that we are so thankful for, and The Fritts family has no shortage of them.  Eddie and Martha Fritts are high school sweethearts from Union City, TN.  After completing their college educations, the couple moved to Indianola, MS to commence their marriage and start their family. Eddie and Martha would live there for 20 years, while Eddie owned several radio stations. They had 3 children: Kimberly, Tim and Jennifer.  All three would become Ole Miss graduates and have families of their own, including furry children too.

After their Indianola chapter, The Fritts’ relocated to Washington state where they resided for another 30 years. During this time Eddie was elected CEO of the National Association of Broadcasters.  Throughout the years, Eddie and Martha would take several trips to Ole Miss for various sporting events. All the while, their daughter Kimberly was ardently searching for a furbaby for her parents to fill the empty nest.  On one special trip, Kimberly called to inform her parents she had found a King Charles Cavalier for them.  It was the perfect match, as Eddie and Martha were so in love with Kimberly’s own cavalier, Ollie.  Needless to say, the news came as such a wonderful surprise and while being on rebel territory, they saw it fit to name him “Toddy”.  Upon their initial meeting, Eddie and Martha could barely pry Toddy from their daughters’ hands as she had bonded him so much already. We can’t say we blame her!

Since their retirement, The Fritts’ downsized from their big house to their townhouse here in Oxford.  They have revisited Washington, which happened to be Toddy’s first vacation; but you would never have guessed it as he traveled like it was a familiar routine.  He relaxed on his “travel pillow” and slept soundly the whole 16 hour drive.  Toddy boy, as they affectionately call him, was born with Curly Coat Syndrome, which is a severe congenital condition that affects the skin, eyes and paw pads.  As a result, Toddy’s paw pads are frequently cracked.  Some breeders euthanize puppies due to this condition, but the Fritts’ mantra was, “We needed him and he needed us.”  Fast forward to today, Toddy just celebrated his 6th birthday last month!  His parents have gotten him a red wagon to take him around, so he can give his little feet a break.

Pre-covid, Toddy loved taking trips to the local Farmer’s Market in his little red wagon. These days, Toddy enjoys socially distanced hangouts in his neighborhood.  All the adults bring their pups and a glass of wine, and sit at least 6 feet apart and celebrates “wine time”.  Toddy rides in his wagon to and around the gazebo, he hops out to potty and then back in the wagon to enjoy his community. It goes without saying, his wagon is his favorite accessory and he looks absolutely adorable in it!

Toddy is a sweet loving boy who has never met a stranger. He adores attention and is always a crowd pleaser.  When Toddy visits the Spaw, he shoots straight to his favorite zen room and jumps on the bed or his other favorite hang-out on the tuft under the front desk.  Don’t dare forget his treat!  In the evenings when his parents are kicking back in their recliners, Toddy will sit at Martha’s feet and look at his dad and wait for permission to jump and cuddle. As if he needs to get consent before cuddling 😉  They are so grateful for Toddy, their children and all of their grandchildren. We are so thankful to have gotten to know Toddy and his wonderful family throughout the years and wish a Happy Thanksgiving to all!

As the days are getting hotter and the nights even longer please join us in welcoming our pet family of the month: The Valle’s! Alicia and Mike were born in beautiful Costa Rica. Mike moved to the United States when he was 11 years old and attended … END_OF_DOCUMENT_TOKEN_TO_BE_REPLACED