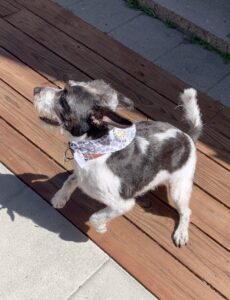 September welcomes the Harvest Month and the gathering of the Gibbs Family!  Monte and Joyce were high school sweethearts, now married for 30 years, with their two adult sons: Jake and Luke.  Monte and Joyce have been active their entire lives, so it’s only natural the rest of the family follows suit. Monte was involved in all kinds of sports, taking after his father, Jake Gibbs, all american athlete turned professional baseball player for the Yankees in the early 60s.  Joyce was a gymnast, cheerleader and chorus member, who became a Rebelette during college, and still managed to graduate from Pharmacy School.

When the boys departed for college, the nest was feeling a bit empty, so along came Dexter and Maddie!  Whether these two pups chose their parents or their parents chose them has never been in question since their fateful meetings at the Humane Society.  Dexter, a black and white terrier mix, was the first to join the family; and named appropriately representing their love for Ole Miss and all things sports related. Since that magical day, Dexter has provided the family with constant entertainment, companionship and endless love. He has especially bonded with his brother Josh, whom Dexter only wants to sit in his lap during thunderstorms and waits there for them to pass. For a few years, Dexter was the only child living at the house; as such he got to embark on a very special family vacation to visit his Great-Grandparents in Arkansas who lived on 80 acres. Dexter ran wild! It was a dream come true, especially when he got to meet the horses!

A few years later, the Gibbses spied Maddie, a boxer/terrier mix. They brought her home from the shelter and Dexter’s only-child lifestyle was forever changed. Maddie adored Dexter and her new family from the very beginning.  Dex ignored her initially, but she was persistent and followed him around everywhere. Eventually, he would play chase with her… but annoyingly, she always won!  Maddie likes to chase the deer too, but not too sure if she wins those trials quite as often.  These two are now inseparable, Dexter shares his tennis ball gun-toy and favorite treats with her, including iced molasses cookies. Yum! They are also both learning tricks together: jump, sit, shake, and high five… perhaps pitch or bat will be next. 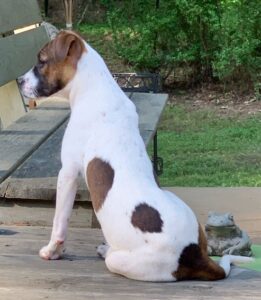 After a long day’s work or even a short trip to Kroger, Dexter and Maddie are always patiently waiting at the door to welcome their parents home.  “Their excitement and unconditional love is amazing!”  Please join us in celebrating the Gibbs family, and thank them for sharing their wonderful memories with us!

As the days are getting hotter and the nights even longer please join us in welcoming our pet family of the month: The Valle’s! Alicia and Mike were born in beautiful Costa Rica. Mike moved to the United States when he was 11 years old and attended … END_OF_DOCUMENT_TOKEN_TO_BE_REPLACED