In this month when we celebrate all things for which we are thankful, Elizabeth and Jeff Hamm celebrate each other, their children Leslie, 25, Jeff lll, 28, Laura, 30 their 2 year old, English Cream Retriever, Lily and the addition of their son-in-law Brandon to the family.

Leslie and Brandon married on October 13th, just 2 weeks ago!  Homeward Bound had a blast shuttling Lily for family photos for the event. Lily even had a Spaw day, just like the girls, in preparation for the big day.

The Hamms live in Tupelo, but also have a home in Oxford. The Homeward Bound team made frequent visits to care for their Golden, Sandy before she passed away in 2016 at the age of 13.? After Sandy died, Jeff and Elizabeth didn’t think they could ever share themselves with another dog.? Their hearts ached for Sandy.? But Leslie, who lived in Jackson and worked as nurse in the NICU, decided to move home to be closer to her family and then fiance Brandon. And in moved her new puppy Lily too! Their hearts are filled with love for this sweet girl.

Leslie brought Lily home as a puppy. When she saw her for the first time she said, “She’s as white as a Lily!” and her name became an obvious choice. She is the sweetest girl and most loving pup. She loves to play with toys. They have never known a dog that enjoys toys as much as Lily. She likes window watching, always looking to make new canine friends, walks with her family (always hoping to meet a new friend) and the beach! The family took Lily to Rosemary Beach last year and she just played and played in the sand. And of course she loves watching Ole Miss sports with her family.

Lily is a true “family dog” and has lived with, and spent lots of time with her grandparents over the last 2 years, but now that Leslie and Brandon have married, Lily will be moving with them to their new home.? Lily has promised to go see her grandparents regularly.

We are thankful to this family for sharing their family with us! 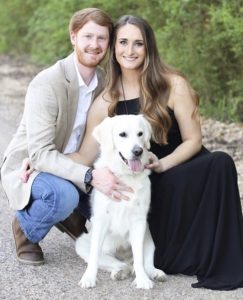 Hello, June! As the days are getting hotter and the nights even longer please join us in welcoming our pet family of the month: The Valle’s! Alicia and Mike were born in beautiful Costa Rica. Mike moved to the United States when he was 11 years old … END_OF_DOCUMENT_TOKEN_TO_BE_REPLACED