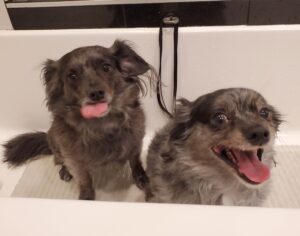 August is upon us, and while we celebrate these dog days of summer, we are happy to honor the Herrington Family as our monthly spotlight.  Lance moved to Oxford in 2000 from central Texas to take a Language Instructor position at the University of Mississippi.  Twelve years later he made a fateful trip to the Humane Society, where he adopted a sister and brother duo: Peaches and Herb, lovingly named after the R&B duo from the mid 1960’s. Lance grew up in a family that was never without at least one furry companion, so he had a feeling he would not leave empty handed, and was happy to carry on the tradition by making his own little happy family in Oxford.

Adopted as littermates, Peaches and Herb are very dependent on each other… if ever separated, there would be no peace. Lance once had to leave Herb at the vet for an overnight observation stay. Needless to say, Littermate Syndrome is evident, and the anxiety that correlated upon their separation was so bad the family cannot undergo it again. For that reason, Peaches and Herb routinely attend their Spaw and veterinarian appointments as a pair.  Once upon a time, before Homeward Bound, the pups hated going to their grooming appointments. Now when it’s time to visit the Spaw, Lance never has to pull them out from under the bed anymore; instead, they are dragging him to the gate!  While at the Spaw, the pair eat up every second of relaxation.  From lounging on their puff beds, to all the snacks and bubbles, their little tails never stop wagging!  You’ve never seen a pair of pups more relaxed in their bubble bath, almost falling asleep so their attendant holds their little heads up as they doze off.  When Lance comes to pick them up, Peaches struts around like she owns the place, happily showing off her new looks. Herb takes his favorite spot at the window and proudly sits as if on a throne awaiting his chariot’s arrival.  People often assume that Herb is a female, because he is smaller and has the silky, flowing hair, but he was actually just the runt of the litter.  Even though Peaches is the alpha dog of the team, Herb will echo any alarm that Peaches sounds. Lance likes to call it “Support Barking”.  Again, the Littermate Syndrome runs deep with this twosome 😉

One of the Herrington Family’s favorite activities is taking walks around their neighborhood. The walks are generally short, like Peaches and Herbs legs, so often they may only make one walk around the block before they tire out. They also love their play dates with their best friend, Farah, a fellow adoptee. They also enjoy paw-trolling their backyard on the hunt for some new friends, like the occasional wandering turtle. Afterwards, they like to jump in the shower with Lance for a good rinse, and it never fails to make him laugh!

Oxford has proven to be a wonderful place for Lance to spread his wings. He mentions he has met some of the most amazing people from all over the world here in Oxford. The sense of community that keeps him feeling at home has been paramount.  But he never forgets his roots, and always returns at least twice annually to that little central Texas town.

As the days are getting hotter and the nights even longer please join us in welcoming our pet family of the month: The Valle’s! Alicia and Mike were born in beautiful Costa Rica. Mike moved to the United States when he was 11 years old and attended … END_OF_DOCUMENT_TOKEN_TO_BE_REPLACED