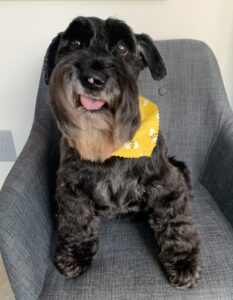 July welcomes our Kentucky transplants, The Hutchcraft Family, who moved here in 2006 with special guests: Winn Hutchcraft, his son Elliott and his vizsla pups, and Nicki, his schnauzer daughter at the time.  Winn also has another daughter, Anna who resides in London with her own furry family, related to Nicki.

Winn attended college at the University of Mississippi back in the 60s. Like most, he fell in love with everything Oxford had to offer and was always determined to return someday.  In 2005, when the Kentucky real estate market slowed, it presented the perfect opportunity for him to do so. He packed up his crew, and headed down south. Not long after the move, Nicki passed away at the age of 15.  Winn couldn’t stand it and shortly after her passing he rescued another Schnauzer to fill the void. We now know her as Sophie, a rare, black miniature schnauzer.  She has since ruled the home and throne, despite attempts from Elliot’s vizslas.

Sophie is equally as loved as she is lovable. She has not only beauty but brains, and an extensive vocabulary to prove it. Sophie also likes to play games; for example, one of her favorites is “Squirrel Alert”.  When Winn says those magic words, Sophie darts outside to chase them away from the bird feeders. Winn and Sophie also play “Guard Dog”, in which she bounces off the couch to watch the doors and ‘woofs’ lightly. Winn will then ‘woof’ back and they go back and forth.  Of the six schnauzers Winn has had in his lifetime, he deems her the smartest.

All games aside, Sophie is two steps ahead of Winn and predicts what he is going to do while patiently watching for him to catch up.  During this pandemic, Winn hasn’t had any need for an alarm clock, due to Sophie.  They maintain their daily routine as follows: At 7am, they wake up and have breakfast, followed by a trip outside, then back inside for a bit more breakfast with blueberries. Yum! At 9am, she encourages Winn to get in the shower.  At 3pm, they enjoy snack time. Dinner at 6pm and another walk and snack at 8:45pm. Winn follows.  She is better than a personal assistant… well maybe Winn is… we’ll let Sophie decide 😉

In addition to her cleverness and aptitude, Sophie is a true survivor.  She has persevered two trips to Mississippi State Vet Med: first for a spinal cord injury, and again for an emergency gallbladder removal surgery.  The second occasion, she was only given a 50% chance of survival. Two weeks later, she trotted her tough self out of the clinic, ready to take on life once more. After all, she has a big job to do taking care of her dad and running the household. Needless to say, her trips to the Spaw are well deserved!

As the days are getting hotter and the nights even longer please join us in welcoming our pet family of the month: The Valle’s! Alicia and Mike were born in beautiful Costa Rica. Mike moved to the United States when he was 11 years old and attended … END_OF_DOCUMENT_TOKEN_TO_BE_REPLACED