It’s always a great day at the Spaw when Tippy Jennings arrives!  She is a special girl, brimming with personality and we are fortunate that her family shares her with us twice a month at the Spaw. The Jennings moved to Oxford in 2014. In that same year, we first visited Miss Tippy with our Mobile Spaw service. In December, Tippy was one of the first pups to experience the newly opened Spaw  and loved it! She’s become somewhat of a fixture here since then and even has her own chair by the front window where she loves to people watch. 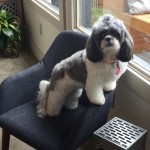 ative and MS State graduate,) and Hal, (a Natchez native and Ole Miss graduate,) met many years ago at a party in Jackson, MS. At the time, Michelle had just accepted a job in Memphis and was relocating. As fate would have it, Hal’s employer relocated him to Memphis, and the couple began dating shortly after they both got settled. After dating for several years, Hal was ready to take the next step…. He got Michelle a puppy for her birthday, an adorable chocolate lab they named Phoebe. Their family life together began with Phoebe; and they married shortly after.

Phoebe was their world. She traveled with Hal, hunted with him and slept with them both every night. Their family grew with the birth of their two children, two years apart. Their eldest son John Handy and daughter Ann Stuart. Pheobe was there for all of it. For 16 love filled years, she was by their side. Devastated by her passing, the family didn’t think they could ever love another dog.  Ann Stuart began to change their minds. She missed having a furry sister, and for her 9th birthday, her wish came true. Michelle, having fondness for her friend Lara’s little Shi Tzu, they found Tippy, aka; Tip Time, Tippy Top, Tip Tip, Shiz and many, many other nicknames. Always the social butterfly, love and light of the family, this little lady is more than they could have hoped for. Their hearts are more full than they could have ever dreamed.

The decision to move to Oxford in 2014 was a big one. John Handy and Ann Stuart, both attending high school at the time, were reluctant to give up their high school years with their friends in Jackson; however, the family loved the charm that is Oxford. They already had many friends who lived here and are even recruiting more to. Even Stella, Hal’s mother has made the move, bringing them all closer together.

Thank you Jennings family for sharing your family and your little lady Tippy with us!

January opens a new door to the future, but still keeps an eye on the past. In this new and hopefully improved year, we are happy to feature The Magee family, as our first pet family of the month in 2021.  The Magee family includes: David, Kent, … END_OF_DOCUMENT_TOKEN_TO_BE_REPLACED