Oxford native, Pam Malone has a very full and accomplished background. She is an Ole Miss Marketing graduate, which was the start of her professional journey that took her to Chattanooga working in advertising.  She then gravitated to the sports industry, where she became the Advertising Director for the Houston Astros. In addition to working for a Major League Baseball team, she worked for two NBA teams (Seattle Sonics and Miami Heat), an NFL team (Baltimore Ravens) as well as collegiate in Cincinnati.  In 2016, after her illustrious career, she retired and moved back into her Oxford childhood home, which was built 60 years prior by her father, a carpenter. It was great being back, but she felt like something was missing. As a dog lover, it didn’t take her long to realize what it was and so she began her pursuit for the perfect companion. Always partial to larger dogs, Pam decided a doodle would be the best fit. When she lived in Seattle previously, she had an Old English Sheepdog, Sebastian, that made the move with her at 12 years old to Miami by car and he lived another 2 ½ years. She didn’t have 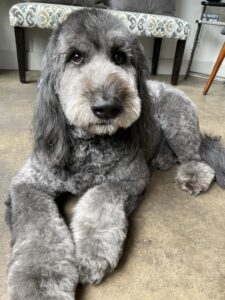 another pet for 20 years due to working long hours, nights and weekends.

Back to her quest, Pam eventually found a teacher in the Oxford school system whose mother bred doodles. She had one left in the litter at that time, and Pam seized the opportunity with expectations of a honey-golden colored baby girl.  Much to her surprise, an 8-week great black bundle of joy came to her!  She was a sweet little “roly poly” and Pam fell instantly in love. Being retired, she could cater to her every whim! They go on 3 mile walks each day, rain or shine. Sadie has trained herself, and Pam, by going to her and sitting on her haunches and begging when she wants to go out. Sadie also goes on car rides and runs errands with her mom. She hangs her head out of the window and wags her tail when she gets excited, which makes Pam laugh because Sebastian didn’t have a tail and just shook his whole bottom.

Pam and Sadie frequently play fetch with her bin full of toys. Sadie likes to chew holes in them, so her mom has had to get a sewing kit so she can fix the holes every couple of days. She doesn’t claim to be a seamstress but thankfully, Sadie isn’t critical of her work; she’s just very happy to have her toys intact. The only toy she doesn’t chew holes in is her big doggie bone that is made from the same material as her bedding. She takes it with her to bed and brings it back out in the morning. She may think it’s her pillow!

Sometimes Pam considers that Sadie may need a sibling. They have rescued 2 cats on their walks, one kitten and one adult cat. Sadie seemed to want to keep them but her mom thought better of it and turned them over to a kitty placement service. Pam does occasionally take her to doggie daycare and she loves it. Sadie is a very social girl who also loves to be pampered and fawned over, hence, she cherishes her trips to the Spaw!  All Pam has to do is mention “going to the groomer” and Sadie dances around and drives her crazy until they leave. The Spaw loves to see her arrive with her head hanging out of the window, ready to pounce at her day of pampering. She embraces the full experience and is almost impossible to get off of the grooming table when it has concluded. She has the longest most luxurious lashes that sometimes get gelled. Pam thinks that some day she will come out with her own line of extensions!  This family is a dream duo, maybe someday a trio if a sibling comes along; but for now, both are so sweet and joyful every time anyone sees them. They are a true tribute to a Happy Summer. Thank you both for being you! 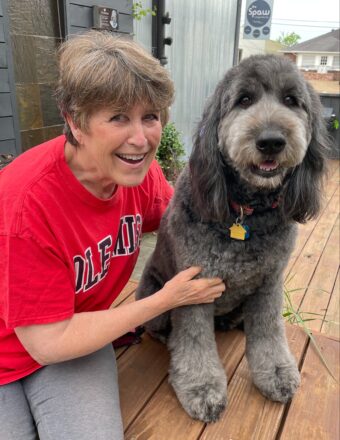 Oxford native, Pam Malone has a very full and accomplished background. She is an Ole Miss Marketing graduate, which was the start of her professional journey that took her to Chattanooga working in advertising.  She then gravitated to the sports … END_OF_DOCUMENT_TOKEN_TO_BE_REPLACED