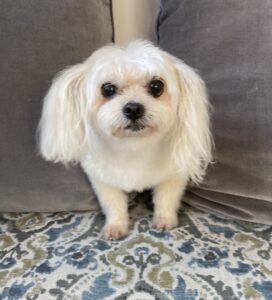 Holidays are defined by family, love, nostalgia and elements of tomfoolery. All warm the heart, just like this month’s featured spotlight, the McDaniel Family: Carrie, Greg, Ansley (17), Aden (13) and last but never least, Mae Mae (12).  Mae Mae is the real survivor story here. Through Carrie’s then job as a home Health Physical Therapist, Mae Mae became a McDaniel and a pivotal member of the family. Life can turn on a dime, and Mae Mae’s certainly did when she met Carrie.

Carrie was on a job, in the middle of nowhere, with a client that had rescued this sweet little abandoned Maltipoo. This client already had 3 dogs of her own that weren’t particularly thrilled with the new addition. From the first time Carrie laid eyes on Mae Mae, she jumped in her lap and followed her around everywhere.  She knew a good thing when she saw it. For weeks, Carrie would text her daughters about this endearing little girl and after a month of the client’s search for her original owners, Carrie was asked if she would adopt her.  She scooped her up, and texted her daughters that they were on their way home. Greg immediately called and said, “You better not be bringing a dog home.”  To which she responded, “Well, it’s too late.”

Even Greg loves Mae Mae now, and she is his suspected favorite. She loves to snuggle with whoever is on the couch or in bed.  In her freetime, she loves to run in the crisp weather and on warm days, can be found sunbathing or chasing frogs. Mostly she loves a car ride with the windows down and the wind blowing through her long ears. Mae Mae is not a girly girl, and gets scarves at the Spaw.. no bows.  She was about 6 years old when she was found dirty, malnourished and alone, and became a McDaniel. For the next 6 years she was wildly loved, but time has taken its toll on this sweet girl.  Her hearing and vision are diminishing and she now has a hitch in her giddy up, but her sense of smell is on point!  She knows when anyone is in the kitchen!

Born and raised in the Mississippi Delta, Carrie (Greenwood) and Greg (Clarksdale), still consider that home. But after college at Southern Mississippi, and continued education in New Orleans for Carrie, they chose to move to Oxford for their career opportunities and a great place to raise a family. Greg is now in sales for New York Life, and Carrie is at Endurance Physical Therapy in Water Valley. It is fateful they came here for no other reason than finding Mae Mae, and also, for Homeward Bound getting to know and take care of this precious angel. They are still close in proximity to both sets of parents/grandparents. Their girls say “My friends from other parts of the state always say they wished they lived in Oxford.” They feel very fortunate to reside here and have the perks of being in this college/small town environment. They are the perfect family to wish you “Happy Holidays!”

August is a warm and sunny month and a perfect month to feature a warm and sunny family! The Carltons: Kay, Rick and their 2 girls Sister Christian, 12 year old Springer Spaniel and Sally Cinnamon, 10 year old Boykin Spaniel. Of course the girls just … END_OF_DOCUMENT_TOKEN_TO_BE_REPLACED