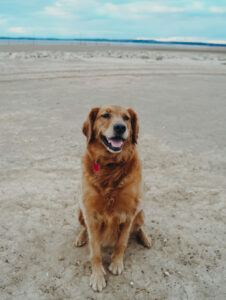 With hopes of spring in the air, the featured family this month will help warm the heart. Chad and Shellye Mills have been married for 26 years and are both from Oxford, almost all of their lives. They love Oxford and that it still has a small town feel. Even though it has changed a lot in the last few decades, this is where they chose to stay and raise their family. They are parents to four children, two biological and two furry: Ashley (22), Cooper (17), Mabel (Golden Retriever -7) and Kitty (2).  Mabel is the star of the show in this tale. The rest of the family are just players in her world.

Much to her chagrin, Mabel was not the first pet of the family. In their first year of marriage, Shellye and Chad, being from families who always had pets, adopted a toy poodle named Snoopy who lived for 14 years. They were very sad over the loss and it took several years to plunge back into adopting another furry companion. In 2016, Chad found Mabel through an old friend who had to rehome his beloved companion of two years. He showed Chad her picture and off he went to pick her up. They became instant friends. When he asked her if she was ready to go,  she jumped into his car and has rarely left his side since. It is his favorite memory with her, among numerous others they share.

Mabel loves to travel and go places with the family, mainly Chad since they are inseparable. She tolerates the rest of the crew, but even if they are all still home and Chad leaves, she has been known to chew things to show her discontent.  Mabel even thinks she needs to sleep with him and eyeballs Shellye when she is getting into bed. Her biggest pet peeve is being separated from him. They love going to Volta Taverna to eat; the staff just adores her.  During winter weekends, they like to ride in his old 1990 Ford Bronco to Sardis Lake bottom where she has lots of wide open space to run and play.  Recently, Chad, Shellye and Mable took a long weekend trip to Chattanooga and Gatlinburg, TN. They researched all of the pet friendly places and activities to make sure Mabel could go too. She was perfect the whole time and loved every minute of it! They took in many sunrises and sunsets and also got to visit Rock City. Chad has a passion for photography, so they took lots of beautiful pictures, mostly of Mable who has been known to strike a pose. 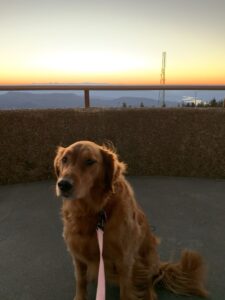 Kitty joined the Mills family two years ago when another of Chad’s friends found a litter of kittens abandoned on his property. Chad helped out by taking one of the kittens home for a friend to Mabel. She was less than thrilled in the beginning but now Kitty is her dear friend. They love to play!  No doubt Mabel is a diva! She gets her monthly Barkbox every, as well as a Spaw visit. She willingly surrenders to her pampering and beautification at the Spaw, (except for the time Shellye dropped her off instead of Chad and she refused to get out of the car. Shhh). After her pampering session is complete, she gets to “help” at the desk where she greets other dogs (and clients when the lobby was still open pre-Covid.) Mostly she sits by the window and looks for her daddy. She is ecstatic when she sees him and has even taken to holding his hand in the car. She is a most devoted daughter!  Happy Spring Mabel and dream up all of the fun things you will do when the weather is warm and all is back in bloom.

**Special note from the Mills: “We are very Thankful for Kelly, AC and all of the staff at the Spaw! We know that when Mabel goes there we do not have to worry about her well being! We find comfort in knowing that they always have the health and well being of our pet in their best interest!”**

As the days are getting hotter and the nights even longer please join us in welcoming our pet family of the month: The Valle’s! Alicia and Mike were born in beautiful Costa Rica. Mike moved to the United States when he was 11 years old and attended … END_OF_DOCUMENT_TOKEN_TO_BE_REPLACED