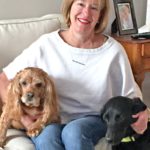 Pet Family of the month of May spotlights Mike and Missy Morrison. They are parents to 6 children, 3 furry and 3 by nature. All lead to each other and makes for a binding tale.

Missy, an Ole Miss graduate met Mike a biochem graduate from Seattle WA at her post graduate job at UMMC in Jackson, MS. Mike moved from Seattle to Jackson to attend med school and his whole family moved with him. Missy and Mike became friends and she eventually set him up on a date with her best friend. They frequently went on double dates since she dated one of his best friends. One thing lead to another and they parted ways with their paramours and began dating each other. That being a conflict of interest Missy quit her job at UMMC and captured a job at the Rogue as a bookkeeper.

After Mike graduated, the young couple moved to Memphis for his residency and ultimately started their family. Through the course of 20 years in Memphis, they brought 3 children, Sarah Winsor, Sam and Mary Michael into this world. Not being quite enough, they acquired their yellow lab Ellie. Although not the first, she was a fiercely loved member of their crew.

One day in a visit with their financial advisor, Glen Cofield,  mentioned an available position for an anesthesiologist in Oxford. This felt like kismet to them, especially when their house in Memphis sold within 2 hours. Even though they loved living in Memphis, they were drawn south to Oxford in what was the summer of 2004.

Already having friends here the Morrisons almost instantly adjusted to the town. Sarah Winsor began her college career and as a sophomore decided she wanted a dog, looked in the paper and found her cocker spaniel ,Lucy, in Corinth. She always wanted a dog named Lucy. She and her roommate drove and picked her up and brought her home. They were a bit premature on the dog adoption since their complex didn’t allow pets. Home Lucy went to Missy and Mike’s. Lucy loved Ellie with all her heart and it was not exactly mutual.

Having made a plethora of friends, unquestionably came in handy when their beloved Ellie ran away. There were many sightings of her and Missy would go looking but to no avail. One day she got a call that Ellie had been picked up and taken to the shelter. Relieved, Missy dashed to rescue her sweet girl. When Missy arrived, she was told that a couple had already taken her before they could write her papers. Even though she was microchipped, Missy couldn’t get her back. Lucy was devastated. One day Missy saw this couple walking Ellie down the street. She stopped and called her; even though she came to Missy and Missy identified her via a missing tooth that had recently been pulled at a dental visit, the couple would not relinquish Ellie.

Downtrodden and depressed, Missy decided to get another dog for Father’s Day, for Mike and for Lucy’s wellbeing. She contacted Marty Roberts, a dog trainer and breeder. He had the last of a litter of Springadores, luckily. She then secured the next member of the family, Ivy, lovingly named by her new brother Sam.

Lucy had her new best friend and sister. The girls love to go on walks and play ball every night. When they get excited they go round and round in circles. They are brilliantly sweet girls. Lucy loves to cuddle and Ivy thinks she is a lap dog. She jumps in your lap and wants to have a conversation with you and seems to understand every word. Every morning when Missy gets up the girls jump on each other with their tails waving like mad as if they haven’t seen each other in weeks. The girls travel wherever the family goes. They frequent Rosemary Beach, which is like their second home and Jackson where all the human children now reside. They love Sarah Winsor’s new family additions too that affectionally call their grandmother Sippy. Missy says it’s for “Mississippi.”

We love our sweet girls Lucy and Ivy. It is always a joy to see them come to the Spaw. They are such happy girls just like their mom, Sippy.

And to the couple who basically kidnapped Ellie, Karma is a bitch.

As the days are getting hotter and the nights even longer please join us in welcoming our pet family of the month: The Valle’s! Alicia and Mike were born in beautiful Costa Rica. Mike moved to the United States when he was 11 years old and attended … END_OF_DOCUMENT_TOKEN_TO_BE_REPLACED