February, a month well known for the celebration of love, also celebrates the Perkins Family this year.  Jessica, Hayden, Preston (20), the twins John Seton and Ashton (17), and baby girl Anne Hayden (3) make up this wonderful family.  Of course, it wouldn’t be Pet Family of the month without the honorees Penny, Poppy and feline brother, James.  It is no coincidence that they are being celebrated this month since they have been graced with so much love and beauty.  We also want to give a shout-out to Hayden’s sister Jessica (formerly PFM, January 2018) and cousins Remy and Roux!

Hayden and Jessica met at a party while they were attending Ole Miss.  It was pretty much love at first sight.  Now 20 years later, they are living the blessings of four kids 2 dogs, a cat and a few furry friends that have passed, especially mentioning Sophie.  She was a very special girl. She and Penny would accompany Hayden to work at his Pediatric Dental Practice except for Fridays which was their standing Homeward Bound Mobile Groom appointments before the truck retired.  She was an excellent mascot for the dental practice.  Once the family recovered from the loss of sweet Sophie, they decided to adopt Poppy last year, also a golden retriever.  As it turns out, she is quite a handful, and quickly became Anne Hayden’s best buddy.  Anne Hayden likes to get in Poppy’s kennel with her to play and when they nap both girls lay on their backs spread eagle.

Jessica has perpetuated her life-long tradition of having golden retrievers in her family.  Her first and favorite childhood pet was Honey, who was welcomed to the family when Jessica was 8 years old.  Honey followed her all over town in Hollandale, MS where she grew up.  She accompanied Jessica on her bike rides and kept her safe.  Honey was Jessica’s best friend all of her young life and was always with her until she passed away right before Jessica left for Ole Miss.  Since then she has had several more Goldens: Sugar, Sadie, Hannah, Bella, Sophie, previously mentioned, and now Penny and Poppy.  The beautiful Perkins’ Golden Girls. 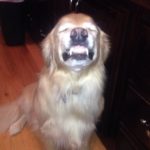 In Loving Memory of Sophie

As the days are getting hotter and the nights even longer please join us in welcoming our pet family of the month: The Valle’s! Alicia and Mike were born in beautiful Costa Rica. Mike moved to the United States when he was 11 years old and attended … END_OF_DOCUMENT_TOKEN_TO_BE_REPLACED