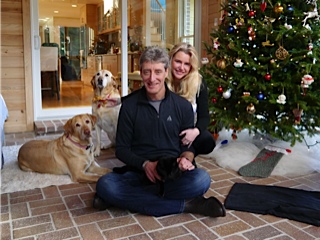 Congratulations to the first Homeward Bound Pet Family of the Month for 2014, The Simons!

Andrew and Gail are pet parents to feline family members Cosmo and Ernie and a pair of lovely yellow Labrador Retrievers, Sophie and Lily. A business opportunity brought Andrew Simon to his Oxford residence many years ago and it has been a home to and refuge for many rescued and loved animals ever since.

Ernie wandered up to the Simon house as a kitten, after Andrew’s daughter hosted a Halloween party and has been ‘patrolling’ their property ever since. The Simons are quick to add that  Ernie actually believes he is the third dog.  Cosmo, their handsome black cat and monsieur senior, was saved from Oxford’s Three Corners area almost fourteen years ago. Cosmo is very fond of birds and a patient soul. He is often found laying, waiting, in the garden birdbath for his next catch!
While Cosmos may rank in years, Lily is the pack leader and runs the household. Lily was part of a litter being offered for sale out of the back of a pick up truck in a local store parking lot and this lucky girl was very happy to get to the Simon home! This pretty lady now displays her Olympic quality athleticism with the Frisbee on a regular basis between swim sessions in the family pool.  Sister-Lab Sophie, who also joined the household as a puppy, steers clear of the pool after a scary splash in as a pup. While she may show no sign of the traditional Labrador love of the water, she does have other admirable skills; she talks and she sings. In her own version of Canine English, she clearly communicates when it’s time for the Simon household to wake up and get her breakfast in order.
Like most Oxonians, Andrew and Gail enjoy the occasional up-close visit from local critters, and frequent glimpses of the local area deer. A few years back, now retired Oxford Veterinarian Dr. Ernie Harland, deliver a spotted fawn from a fatally injured doe.  The Simon barn became a temporary home for the infant with family members assisting in bottle raising the newborn. ‘Apple’, named after his favorite snack, retained his wild heritage and was later happily returned to the woods thanks to the attention he received while enjoying a stay at the animal-loving Simon ‘guesthouse’.
Thanks to the Simons for sharing their stories and family with such openness, warmth and joy. We can’t think of a better way to begin the new year.

Hello, June! As the days are getting hotter and the nights even longer please join us in welcoming our pet family of the month: The Valle’s! Alicia and Mike were born in beautiful Costa Rica. Mike moved to the United States when he was 11 years old … END_OF_DOCUMENT_TOKEN_TO_BE_REPLACED