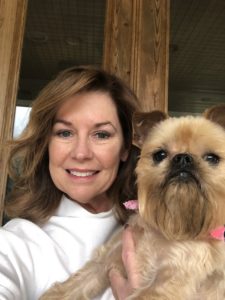 The honored clan for April’s Pet Family of the Month is a very talented Mississippi native and Ole Miss graduate, Christy Sundbeck.  She is the proud mother to 2 children, Larkin (29) and Barry (28), that are also fellow Ole Miss alum.  The third child and star of the show is an immigrant from Princeton, NJ named Eli.  He is a Brussels Griffon and a born champion, literally.  His father, from Russia, won ‘Best in Breed’ and his mother was an agility trial competition champion.

Eli came to live with Christy to keep her from having a completely empty nest, once both of her children left for college.  Christy loves Ole Miss sports, and had a residence here for ballgame weekends, so it seemed like the perfect destination. She had season tickets to all of the sporting events, so the kids had plenty of bonding time with their new brother, Eli.  They claim he is her favorite, after all, as he is her first ‘inside’ dog.  Not to mention, he has his own wardrobe, and absolutely adores clothes!

Before buying her permanent residence in Oxford, Eli and Christy would embark on many road trips to and from West Point, where she raised her other two children.  Eli was the perfect road trip companion in keeping her company, however, he would have preferred riding in the driver’s seat.  Christy began her career there as a CPA and worked in that field for many years.  Later, she began her journey in commercial real estate and even managed some of her own companies. One special project she oversaw was the transformation of an old Ritz Theatre in the middle of the town into The Ritz Theatre and Conference Center, which included the Ritz Café. Unfortunately, Eli couldn’t really be a part of these projects because as sweet as he is, he cannot tolerate others shaking his mother’s hand or giving her hugs.

A few more of his pet peeves include seeing other dogs or animals on TV.  If the animals are associated with a commercial that has a song or jingle… Eli will come racing from the other room to bark at them!  He also does not like most cartoon characters… and is quickly annoyed if anyone on the screen is fighting or yelling.  All of those funnies aside, he is such a loving boy.  Although he cannot attend every event with his mother, she makes sure to provide him with pet-nanny visits, where we always make sure to engage in his favorite game of fetch!  The entire Homeward Bound squad is obsessed with Eli.  When we see he is scheduled for his day of pampering at the Spaw, we all stop by to see him and gather all the loving’s he can muster.

Hello, June! As the days are getting hotter and the nights even longer please join us in welcoming our pet family of the month: The Valle’s! Alicia and Mike were born in beautiful Costa Rica. Mike moved to the United States when he was 11 years old … END_OF_DOCUMENT_TOKEN_TO_BE_REPLACED